The black widow spider is one of only two native spiders that are dangerous to humans (the other is the brown recluse). The Western black widow (L. Hesperus) is the type of black widow that lives in South Pasadena, California. One also has to watch out for the brown widow spider, but it is an invasive species that is not native to California. 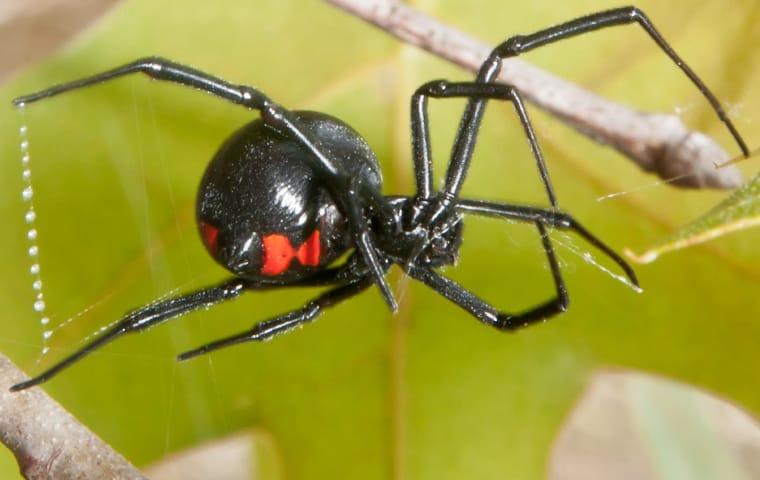 Black widows are a smooth black spider with a red hourglass on their lower abdomen. The female’s bodies are about ½ inch in diameter, with a leg span of 1½ inch. Females who are full of eggs may be bigger. Males are ¼ inch diameter, with a leg span of ½ inch. Juvenile spiders are tan and have white stripes on the abdomen. There are dots of red within each stripe. Males retain juvenile coloration and as adults, they stop eating and their abdomen shrivels up.

Where Do Black Widows Hide?

Black widow spiders generally live outside in sheltered areas such as woodpiles and under crevices. They like dark places to hide. When inside, the spiders are usually found in crawlspaces, attics, and basements. Their webs are messy, and they often make them between a wall and boxes stacked near the wall, in a dark corner near the floor, or under furniture that is rarely disturbed.

The female lays her eggs in a pear-shaped egg sack that is whitish-yellow to brown. She may lay 300 eggs per egg sack. A female may produce more than ten egg sacks during her lifespan. The eggs hatch eight to ten days after being laid. They stay in the egg sack until they have molted once and emerge from it two to four weeks later. At this point, they produce a single filament of silk and use it to ride the wind to a new location. Once there, they must go through seven more molts to reach sexual maturity.

How Do You Know If You’ve Been Bitten?

Black widow spiders are shy and will retreat when they can. People are most often bitten when they accidentally squeeze the spider or when she is defending her egg sack. Bites are rare but serious. The venom can cause the following symptoms:

If you think you have been bitten by a black widow spider, go to the hospital emergency room immediately. They can give you the antivenom to stop the symptoms.

How To Prevent A Black Widow Bite

The best way to prevent incidents with black widow spiders is to make sure there are no other pests in your home. Without food, the spider will starve. Sealing cracks and crevices in your home will make it difficult for black widows to find their way into the house. This also keeps their food outside of the house.

It is equally important to prevent the spiders from getting a ride into the house. Stack firewood away from the home. Check it for webs and spiders before bringing it inside. Wear long sleeves and gloves when handling the wood or working in infested areas.

Where To Get Help

Black widow spiders are a hazard in your home. Because of their reclusive nature, they are hard to find. Since the females lay so many eggs, one spider quickly becomes many spiders. Kat’s Pest Solutions can help. Our trained technicians will come out and seal the cracks and crevices around your home to keep both the spiders and their prey outside. We then take care of the black widow spiders inside the home as part of our residential pest control service. If you are experiencing a black widow spider problem, call Kat’s Pest Solutions today at (877) 528-5287 or (323) 404-7029 for a free inspection.

Complete the form below to schedule your no obligation inspection.

Kat's Pest Solutions is a great company to work with. I have used them several times for various issues and they have always been responsive, professional, fast and effective. I wouldn’t work with anyone else. Thank you Kat's Pest Solutions for always coming to our rescue!

Get started with swift and reliable rodent and pest control services in South Pasadena, CA.